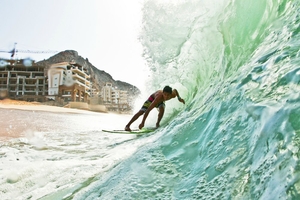 "The Cabo contest represents the beginning of the United Skim Tour 2012. As well, this start sets a bunch of expectations about who’s going to dominate the hole thing. After the Cabo final which was such a motivating battle between the old and the new school between Bill Bryan, Paulo Prietto and Sam Stinnett. It was Samm  who ended getting a couple of barrels that made the difference. It is impressive how Sam’s become in such an experimented competitor when it comes to winning crucial heats"...Click to read more on Skimmexiko